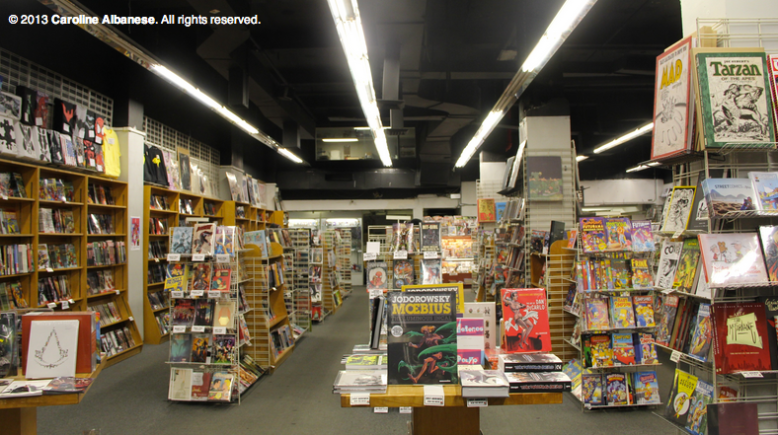 With access to applications like ComiXology, readers are able to download their favorite issues digitally to their smartphones or tablets, anytime and anywhere there’s Internet connection. And, just as iTunes signaled the death of the record store, a similar sense of mortality is creeping upon the neighborhood comic book store.

Last year, Comixology CEO David Steinberger said in an interview with the tech publication, “WiRed,” that users had downloaded 25 million comics from the digital comic platform. That same year Diamond Comics Distributor, the sole book distributor for comics, sold an estimate of 31 million comics through May of 2012.

While these sales numbers were estimates that did not account for international or graphic novels sold through Diamond, the growing popularity of ComiXology has comic shops feeling the pressure.

Shop owners, like Robert Conte of New York’s Manhattan Comics, has had to adjust his inventory to compete with the new digital market. He no longer carries as many action figures or memorabilia, and instead sells more trade paperbacks of high selling heroes such as Spider-Man and Batman.

Conte said he was constantly conflicted between stocking what he wants to carry and what actually sells. One-time comic store staples, like long boxes filled with older issues saved for enthusiastic collectors, were getting the axe.

However, stores like Conte’s can’t compete with ComiXology’s unlimited inventory and 24 hour accessibility.

Accessible through their site or application, ComiXology’s store boasts over 30,000 comics from 75 different publishers like Marvel, DC, Image, IDW and Valiant.

Founded in 2007 as a digital pull list service that allowed users to track what they wanted to buy in stores, ComiXology revolutionized the comic book and graphic novel industry by delivering a cloud-based digital comics platform that made discovering, buying, and reading comics more accessible than ever before.

John D. Roberts, co-founder of ComiXology, said in an email interview that his application had completely altered the comic book industry by appealing to a broader audience.

“ComiXology has an international user base of comic book fans all hungry to read comics,” said Roberts. “Our international audience now has unprecedented access to comics like they never have before, and those fans who live in the United States, who live 50 miles or more away from a comic shop, now have a more convenient way to buy and read comics. As a result we’re seeing a resurgence of lapsed readers returning to comics.”

Notable comic publishers such as Marvel, DC, IDW, and Image sell their books through Comixology. This has made the app the only legitimate digital equivalent a physical retail store.

However, this is not desired competition from comic book stores, who are already struggling to stay afloat with higher comic book prices and a diminishing demographic of young readers.

Though rolling with the punches, Conte said he firmly believed that digital has its place but cannot compete with a dedicated comic book shop.

“When you’re on a smartphone, you’re really reliant on whatever the smartphone says to you and the recommendations that show up there,” he said. “While readers may get comic recommendations from friends, if there’s one thing a tablet cannot replicate, it’s the customer service and community around a comic book store.”

The digital experience is more than just swiping on a tablet, however, as the device’s backlight and the ability to zoom along the pages allows for easy reading at any time. Depending on a device’s resolution, the coloring and art of a book can be visually enhance, showing the true talent of the industry.

The issue of shelf-space, something many readers struggle with, is non-existent as the application stores each issue in its digital library. However, it is only accessible with an Internet connection, and longer books may require longer loading times during reading. Issues such as these are why many fans are holding out from going completely digital, still preferring to read physical issues from their local comic book store.

Stores like JHU Comics offer a friendly, welcoming atmosphere to attract new and returning customers to their shop.

Customer loyalty and strong word of mouth are what keep shops alive, especially in a densely populated city like Manhattan. Stephen Norman, store manager at the recently renamed JHU Comics (formerly known as Jim Hanley’s Universe), hasn’t seen a significant drop in the store’s physical comic sales – at least not yet.

However, the revolution has not only affected comic store owners but the comic creators themselves.

As more people read comics for the first time digitally, Robert said that the industry will see changes in the way comics are produced.

“Creators are going to begin focusing on digital as their primary market and print as their secondary, which means the digital experience will be the preferred experience,” said Roberts. “Things like double page spreads, font sizes, even page layouts will evolve as a result.”

Even with this innovation, Norman said publishers are still trying to figure out how to utilize digital distribution without eliminating shops.

“I’ve seen a lot of different titles provide combo-packs where publishers will provide codes for a digital version of the comic if you purchase a print version,” said Norman. “Besides from things like that, they haven’t really reached in that much outside of specific sites like Comixology. I’m not sure how much publishers are trying to push their comic content via digital.”

While publishers and storefronts continue to struggle with the new medium, independent comic creators have embraced the digital frontier.

Comic creator, Eric Alexander Arroyo, is a senior cartooning student at the School of Visual Arts and author of the webcomic “Punch Gun.” He has sold his books through JHU Comics, and is currently preparing his work for digital distribution.

“Even though the Internet is a bigger sea of people, having that kind of global access is great for cartoonists, but also comic consumers,” said Arroyo. “They are now able to explore so many genres of work for cheap or even free, and it’s really accessible for people.”

If the digital industry keeps comics afloat Dan Parent, a veteran writer and penciler with Archie Comics, said he’s all for that.

“I think there will always be comic shops, although much fewer, unfortunately. People will always want paper comics too,” said Parent, who sees publishers investing more in trade paperbacks and digital comics. “I see less 32 page comics and if I could change one thing it would be to bring back the publishing standards from 10 or 20 years ago.”

As ComiXology works to bridge the gap between young and old readers, there is aspiration to inspire higher standards for comics as a result. In the meantime, Roberts and his team are working hard to continue to play a major role in the revolution.